I love this song

Mark Knopfler
Posted by Jpt Arnakak at 09:51 No comments:

Here I found five ravens dancing in the sky 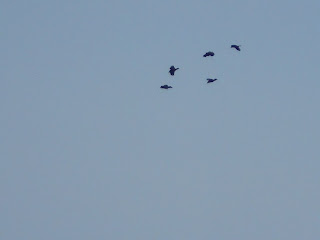 I call the picture, Sagittarius A*

I've also seen the sea breathe in, at one with Sila 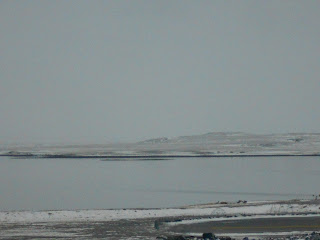 I call this, matins.

Jay
Posted by Jpt Arnakak at 20:21 No comments:

Whenever I read or write anything I do it in a voice that seems fitting the sentiment and "zeitgeist" of the moment. For instance, an expired Twinkie (in the voice of Cleveland Brown, Jr):

But most my writing and reading preference tends to the real—fiction has proved yet, time and again, an elusive prey. -One day I hope to master the art of understanding the social "conventions" but I have yet to achieve such blessedness so as to sustain credible dialogue. But I digress.

My favourite voice is Anthony Hopkins. It is not just the 'dramaticality' of his voice  but the substance and cadence of his delivery. These words are not so much articulation as are appeals for mercy in the judgement from on high. In reading up to where

= "The prayers of David, the son of Jesse, are ended."

real life is breathed upon the sacred words, for eg. those that begin Psalm 130 (in Hopkins' voice):

or in the closing remarks of his aged Ptolemy in the movie, Alexander The Great:

His tragedy was one of increasing loneliness and impatience with those who could not understand. And if his desire to unite Greek and barbarian ended in failure... what failure! His failure towered over other men's successes. I've lived... I've lived a long life, Cadmos. But the glory and the memory of man will always belong to the ones who follow their great visions. And the greatest of these is the one they now... call "Megas Alexandros" - the greatest Alexander of them all.

as much as his portrayal of the psychopath, Lecter, whose interiority and impulse are casually betrayed during his lecture on Dante, or in the writing of the scented letter to Starling where his admiration for her is not so much her acumen (as he would say) as her tenacity (ever the one to dismiss that-which-is-not-him, not even in compliments). The drama belies the beauty of these words put together so thoughtfully and with careful deliberation.

Jay
Posted by Jpt Arnakak at 17:53 No comments:

In my long examination of the properties and structures of language, I have come to realize that a better analogy for the human brain might be that of a resonance chamber that registers electro-chemical activity along neural networks rather than molecular vibrations in the air.

Much like McLuhan's "medium is the message", this resonance chamber determines what it registers and conveys as meaningful. This McLuhanian feature, though, is of a higher dimension in that its adaptive qualities and general plasticity makes it dynamic and interactive more like an equation than a linguistic expression. In other words, this resonance chamber analogy allows such possibilities as music, poetry, political ideas, philosophy, etc. to be generated as meaningful patterns by the simple virtue that a self-same neuron (or, junction) has the capacity to serve a certain function for one dendrite and another, entirely different function for another dendrite that are attached to it.

There are notions of 'providence' and 'regulation' and 'intent' built into the system—ie, our sense of self goes hand-in-hand with the notion of self-preservation. These are necessary features because the resonance chamber is a two-way; external and internal stimuli interact to give us impressions that in turn emit a response of some kind. Purely internal stimulation would generate meaningful patterns by the very act of reflection: music, poetry, philosophy, or "self-narratives" (umwelts?)—these are emotional and/or psychological states that give further "evidence" of our agency and self.

My love of music (and I say "my love of") is that not only do I appreciate music created by others but I even attempt my own hand in music and derive great satisfaction from both. This process trains the "ear" to be able to mentally and intellectually cohere and/or deconstruct sounds rather like an ability to draw or appreciate visual art.

There is a mathematical idea or process called, "zero-knowledge proof" that allows all this creative process to take place seemingly without conscious effort. Ivars Peterson explains it like this:

The idea, a product of several excitedly interacting groups of computer scientists and mathematicians in the United States, Canada, and Israel, developed quickly. Initially, Shafi Goldwasser, Silvio Mical, and Charles Rackoff, motivated by theoretical questions concerning the efficiency and reliability of computer algorithms , worked out that it is possible to convey that a theorem is proved without having to provide details of the proof itself.
...
Manuel Blum extended the scheme to cover any mathematical theorem.
...
Blum's scheme is interactive. It features a dialog between the prover, who has found a proof for a theorem, and a skeptical verifier. The verifier can ask a special type of question that requires an equivalent of a yes-or-no answer.
...
An example from graph theory shows how the scheme works. Any network of points, or nodes, connected by lines, or edges, is called a graph...The prover has found a continuous path along the connecting links that passes only once through each of the 11 points on a graph and returns to where it started. This special type of path is called a Hamiltonian cycle.
...
Significantly, any mathematical theorem can be converted into a graph in such a way that if the theorem has a proof, then the graph has a Hamiltonian cycle. (Ivars Peterson, The Mathematical Tourist: snapshots of modern mathematics, 1988, p. 214-216)

Could consciousness (ie, us!) be a series/sequences of Hamiltonian cycles in a resonance chamber? The "prover-verifier" could be a particular, idiosyncratic constellation unique to each individual, each emotional/psychological state/impression, each individual instance of a completed cycle.

Jay
Posted by Jpt Arnakak at 08:10 No comments:

I have no idea why we exist. I certainly have sought answers, and all I've found is beauty.

The mathematics of physics is all-encompassing. There is no way out. The shell is immaculate. Ie, "without blemish or breach (in the continuum)".

Our emotions are real. But these "emotions" are not what we think they are: the Juggernaut is above reproach but it can also point out where we are.

We exist on a planet in the outer edges of a spiral galaxy. We are no wispy dust: we are but an inkling of a value in an equation, a possibility along the Real Line.

Jay
Posted by Jpt Arnakak at 07:13 No comments: